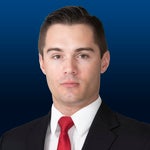 J. Allen Foretich, Jr. is an associate attorney in SKG's PIP Department. Mr. Foretich was born and raised on the coast of Virginia, where he earned a Bachelor of Arts in Political Science from Christopher Newport University in May 2011. After college, Mr. Foretich moved to Jacksonville, Florida, where he earned his Juris Doctor from Florida Coastal School of Law in May 2015.

While attending law school on a scholarship, Mr. Foretich also worked part-time as a personal injury law clerk at The Law Office of Johns & Von Roenn. It was in this capacity that Mr. Foretich developed an appreciation for helping the injured in their stand against the insurance companies, and began laying the groundwork for a career in the personal injury field.

After becoming a member of the Florida Bar in 2015, Mr. Foretich continued fighting for the “little guy” when he began working as an Assistant Public Defender in Broward County, Florida. For almost three years Mr. Foretich spent almost every day in the courtroom and represented thousands of criminal defendants. He handled a variety of cases, with charges ranging from simple retail thefts to robberies, drug trafficking, carjacking, and attempted murder in the first degree.

Mr. Foretich eventually parted ways with criminal defense to return to the personal injury field, and in 2018, he proudly joined the SKG team.